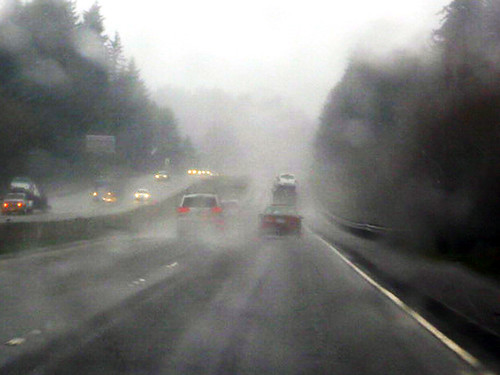 Seattle Trip: March 28-30, 2008
I end up in Seattle about every other year and usually for something specific.

I married a man who was all things Bumbershoot when I met him. I think he went for something like 18 consecutive years. We even went there on our honeymoon. (We also went to the San Juan Islands and Victoria, BC. It’s not like Bumbershoot was our only destination.) We’ve gone up for that. We’ve visited family and friends and gone to soccer games. I’m too lazy to look it all up.

I always love Seattle when I’m there. But when I’m home I think: I don’t want to go to Seattle. The biggest reason is that I hate being in the car. At 2am it’s probably a 2.5 hour drive. Any other time it’s more like 3.25+. It was raining giant snowflakey drops on this trip.

We arrived Friday afternoon and checked into our hotel and sat around reading (me) and blogging (him) and then we went to Ballard to meet some friends who took us to a fabulous meal at Cocina Esperanza. 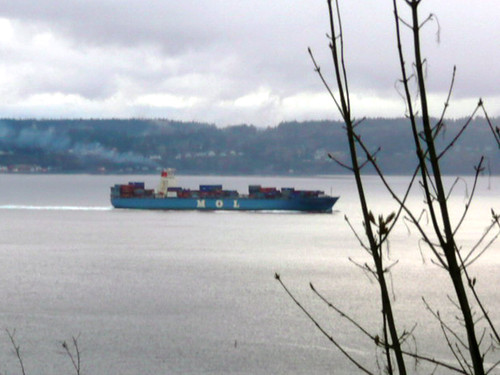 The next morning we slept in and on our way to the Frye Art Museum we discovered the Yesterday Cafe.

Really it was called The Corner Cafe and it looked like your typical espresso/scone breakfast, quick roast beef sandwich and chips for lunch kind of place.

It turned out to be much better than that. We sat down as Paul McCartney crooned “Yesterday” for us and we ordered and then we split the paper. The Seattle P.I. is an awesome paper.

We’d been sitting there awhile when I commented, “Wow, this is a long song.”

Then again 5 minutes later. “This must be the extended disco remix.”

Finally, “Is this song still playing?”

“Seven times in a row,” my husband said. The song ended and we listened. Silence. “Whew,” we sat back in our chairs.

Finally a lady got up and stomped over to the counter and complained and Bob and I burst out laughing. We weren’t laughing at her, we just thought the repetition of Yesterday was part of the ambiance. 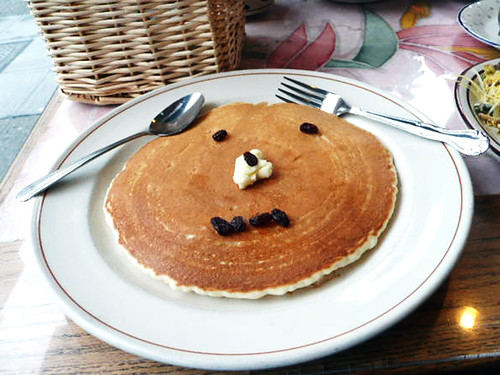 Bob doesn’t like potatoes. I’m just learning this after 100 years of marriage. I like potatoes but it wouldn’t hurt my feelings if he said he didn’t like them. I’m not sure why he was so vague about it before now. He asked to substitute for a pancake. He said he didn’t mind paying extra.

Later she brought out the world’s biggest pancake and said, “The cook surprised me with a big pancake. I told him it was for a big man.”

Of course we had to take photos and then the cook came out to see what we were doing. Bob was thrilled with his breakfast.

After breakfast we went to the Frye Museum to see the Robert Crumb exhibit.

My Bob captures the mood of the thing pretty well so I’ll give you the short version. Stuffy museum, counter-culture hero: weird but good. I loved seeing the drawings up close and seeing how much white-out the artists used. This should be a D’oh! moment but I always think creating things is easier for everyone else.

After the museum we hiked downtown. In case anyone reading this has never been to Seattle, downtown is built on the side of a steeply sloping cliff. If you fall down you’ll probably bounce a few times and then fall into Puget Sound.

We went to Pioneer Square and Bob said good bye to Bud’s Jazz Records which is closing and I’d love to find a good link but wikipedia is letting me down. I feel bad for the kids of the future that they’ll never know what it’s like to hang out at a cool record store and flip through the inventory and chat with people in the store and see in-store shows. I understand the evolution of music, but I have some fabulous memories of hanging out in record stores.

While Bob was at the record store I went to Elliott Bay Books to buy books by all my instructors at Clarion West this summer.

Then I met him at J&M Cafe for lunch. This picture cracks me up because in my head I always think I look so stylish. Then I see a photo like this and think I look like an unmade bed.

J&M Cafe is way yummier than you might guess from the front door. And it was late afternoon so very slow and we got super A+ service. Bob had some plank salmon that was fabulous and I had a roast turkey sandwich and a big salad. And we both had beers.

Then we hiked straight uphill back to our hotel and had a killer nap.

That night it was rain/snowing sideways for our big old people night out. It was completely miserable. We chose our hotel because it was convenient to downtown and to Neumos where we had Bob Mould tickets.

We braved the insanity and found some Vietnamese food that was pretty good. I was still sorta full from lunch. And when we were done, it was way too early for the show because rock and roll doesn’t schedule itself for old people. So we took our leftovers back to the hotel (and forgot about them, oh well) and read for another half hour and then went back out into the sideways ice monsoon AGAIN to get to the club.

Upstairs there was a bar and a coat check (yay!) and some tables and an place where you could see the stage below and a sort-of seat-step thing against the wall where you could sit. This is where we parked.

There was an opening band that I forgot the name of. Sorry guys! I liked them. They started at like, 9:30p and finished at 10:20p. Have I ever mentioned that my bedtime is 9pm? So we sat there and I was thinking: This is exactly why I hate going to shows and I was shooting my beloved the stink-eye because this was all his idea.

But I should say that I’ve been a Bob Mould fan for a long time â€” I have 3 or 4 artists that I’ve loved consistently since the 80’s and Bob is one of them. My Bob was there because of me.

Mould came on at about 10:45p. And as soon as he started, all was forgiven. We’d chosen a strange place to sit but I could stand on the step and see Bob perfectly and he played tons of fabulous songs including tons of Sugar stuff and I Apologize from Husker Du.

The next morning we were back in Ballard for breakfast with more friends and then back on the road home dodging the snow.

Posting will be light for the rest of the weekend (I imagine you’d be relieved) so I can do tons of writing.