Nothing Bad to Say 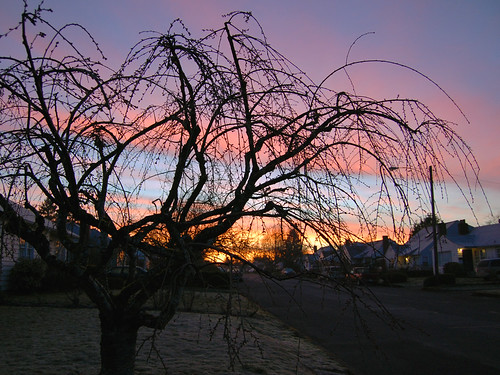 I woke up at about 1:30a this morning and never really got back to sleep. I’m so wonky that I actually described the above photo as “Sunset this morning.”

By the skin of my teeth I managed to leave the office at 12:30p as planned. It never fails that if I try to take a half day, something monumental has to be done 20 minutes before I want to leave. Today was no different but my determination was unstoppable and I got my thing done, made my bus and was back at my car by 1pm.

I’m only writing this to tell you about how perfectly fabulous Toyota of Vancouver was this afternoon. I have said and thought bad things about them after some visits in the past but they were A+ with extra credit today.

When I walked in, I told them that a dummy light went on shortly after I left last week and could they take a look. One guy grabbed my keys and ran out the door while another guy made a joke about me calling them dummies. I mentioned that I’d like to get new windshield wipers because I totally forgot last week and he said it would be cheaper if I bought it from parts.

“I don’t know how to install them,” I said. And he said, “One of these guys will install them.”

He then took me to parts by walking me through the service area with all the guys working on cars. Then in parts, he stood there and b.s.’d with me while we waited for them to find my part. Once they found it, he took them back to my car while I paid, so they could get them put in.

He instructed me to go back in the way I came and I asked, “Is that cool? Doesn’t your insurance company frown about customers wandering around out there?” And he says, “Yeah, probably. I bet [redacted] wouldn’t like it.” I had no idea who [redacted] was but said I would run if I saw him.

Then I paid less than $11 for my part and trotted back out to the service area and the first guy from when I came in saw me and laughed and said, “You’re everywhere!” And I laughed and he said to be careful walking through the service area and I said, “You mean, don’t break my neck right here?” Then he showed me this really cool old car they’re fixing up to put in the showroom.

When I get back to my car there are FOUR (4!) guys working on it, one each installing a wiper, one figuring out the malfunctioning rear light and one watching him, plus my friend from parts cracking the whip as they worked assuring me they would get it done as soon as they could. I think about 15 minutes had passed so far. I was at least an hour away from being concerned about how long it was taking.

They didn’t charge me for the rear light and I was on my way by 2pm. I have nothing unkind to say about Toyota right now.

Note to Uncouth Heathen: I have many fabulous ideas for you and will make it into a whole post. Stay tuned.

This entry was posted in doing it wrong, sleepless in Vancouver. Bookmark the permalink.