Today’s My 16 Year Anniversary Working for the Uncle/Boss

I don’t have anything to say about the Oscars except I enjoyed it more than I expected. I did drink a tad too much wine and did a lot of shouting at the TV so that might be part of it. The big Once number and win was my favorite part. The first Enchanted song made me want to stick forks in my ears. No extended interpretive dance piece this year. Yay.

I started to write about food preparation on Friday and got side-tracked by the manapua cobbler story. I can’t figure out why some weekends there is no cooking project too complicated to tackle and other weekends I’m pawing through the cupboards trying to find something where I just add hot water and stir.

This weekend was hot water and stir. Saturday we went out for hamburgers and last night I made salad and Bob brought home pizza. Friday night I made a variation of the Pam Special which goes like this:

I chop the onion and put the garlic through the press and toss in a skillet with a little bit of olive oil on medium heat. I’m going to take a picture of my garlic press if my camera ever gets here. That’s what I get for “free shipping.” The camera is probably taped to the back of a turtle somewhere in Montana about now.

Our garlic press is our oldest and most-used kitchen item. In the first year of our marriage I killed at least 3 garlic presses because they were flimsy and broke under the strain of my enthusiastic pressing, except for one that broke when I tried to press ginger. It’s probably obvious to everyone except for me, but just in case: don’t try to press ginger. It won’t work.

This garlic press came from Germany (it actually says on it, “W. Germany” so maybe it’s also a collector’s item) and it’s the toughest gadget ever. It’s been through the dishwasher a zillion times, dropped in the garbage disposal, bumped around in the bottom of the random kitchen stuff drawer with nutcrackers and measuring cups. No one has ever tried to press ginger in it. It works like a dream every time.

While the vegetables cook I dice the chicken breast. I don’t really enjoy looking at a giant slab of chicken breast on my plate. I like it in bite size pieces and incorporated into the dish.

Oh, before you start all this, fire up your rice cooker. The NYT did an article on basic kitchen appliances and said you don’t need a rice cooker. Sure you can live happily without one, and yes, it’s not that hard to make rice on the stovetop. So what? We love our rice cooker. 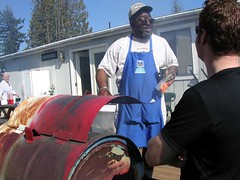 Add the chicken to the vegetables and cook until the chicken no longer looks raw. At this point normally I add a Trader Joe’s simmer sauce but we had opened this jar of Mr. Brown’s barbecue sauce so I poured in a blob of that instead. Tom Brown was one of Bob’s students and we always run into him at the grocery store. He sometimes has barbecue parties which are super fun and feature large quantities of incredible meat.

Then I turn the heat down and let it burble until we’re ready to eat. If it’s going to be awhile and the pan starts to look dried out, I add a splash of water and put the lid on. If I’m in the mood I make a salad and sometimes throw some sort of bread product on the table just in case the rice isn’t going to be enough.

This entry was posted in cooking, doing it wrong, pamily. Bookmark the permalink.