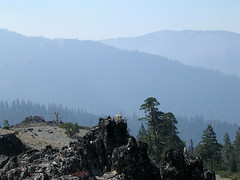 Roots and Berries
Several weeks ago there was a story in the paper about this woman who was lost in the woods. I’m too lazy to look for the article so I’m re-telling the story from what I can remember.

It was a great story because she was in her 70’s and after a big search over several days they found nothing and gave up. Two guys on the rescue team, on their day off, decided to go out and look a bit more and found her and it was like 10 days later.

Her family was at home planning the memorial. When they called the husband, “We found your wife,” he said: “You mean her skeleton?”

She was in bad shape but last I read she was recovering.

But that’s not why I’m writing this. One of the rescuers or doctors or whatever made a statement that they weren’t sure what she survived on in the woods, maybe roots and berries.

Seriously, is there anyone outside of a trained outdoorsman who would recognize an edible root out in the woods? If you were out hiking and got hungry and turned out you left your Tanka Bar in the car and you thought, “man, some delicious roots would really hit the spot right now,” would have the first clue what to look for?

I don’t have any outdoor training but I’ve spent time a lot of time in the woods and other than wild onions which I’ve only seen in one very limited location (see photo) I wouldn’t know the first thing to eat. Even the berries part could be treacherous because I remember seeing some pretty red berries in the woods and my Grandpa told me he wouldn’t eat them because he didn’t see the birds eating them.

I just thought it was funny that the spokesperson thought this lady might have eaten roots.