Deer in the Road 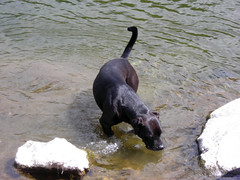 Shadow is my sisterâ€™s dog but Erin was out in the field so he was staying with Mom and Dad while we were visiting.

One morning we took him on a walk to Dolanâ€™s. We park on the road and hike down a long hill to the river bar.

Shadow took off the second the car door opened. We followed behind in no big hurry. About halfway down the hill we rounded a turn and we could see Shadow, crouched in the dirt. We couldnâ€™t figure out what he was doing until we got all the way around and there was a huge doe standing in the middle of the road.

I had my camera on me but I wasnâ€™t fast enough. My Dad called the dog and Iâ€™m not sure who sprang first, the deer or the dog but they were off up the mountain crashing through the brush. We kept calling the dog, like that was going to do anything.

Shadow makes funny yipping noises when heâ€™s chasing things, apparently. Thatâ€™s what Mom said when I made a worried face. I didnâ€™t think he could catch the deer but I was a bit worried when I heard that noise. 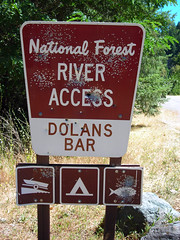 We continued walking and not far from where the doe was Mom stopped me in the road and pointed. Just off the road, standing in the brush and not moving except for the twitching ridiculously huge ears, was a little fawn. So cute. The doe was drawing the dumb dog away from her baby.

We did our entire walk without seeing or hearing the dog again. Dad was wondering if we should just come back later and look for him or what.

As we trudged back up the hill we kept calling him and as we got close to the top, we heard a voice and then came my husband followed by a tired dog with his tongue hanging out of his mouth. My sweetheart had come to join us. He found the dog flopped out in the shade from the car and it took a lot of convincing to get him on his feet and back down the hill to meet us.

This entry was posted in doing it wrong, Orleans. Bookmark the permalink.