Carefree Mind Of Her Own 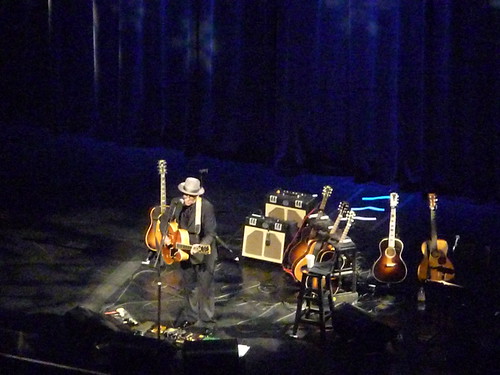 Photo courtesy of wrestlingentropy. This isn’t even from the tour we saw. There were a bazillion people taking photos last night and nothing CC on flickr. Boo.

That Elvis Costello show was one of the best shows I’ve ever seen in my life. And this from a person who is a great Elvis admirer but not a hardcore fan.

All day I’ve been thinking about what I want to say about the Elvis show and all I can think of is: It was awesome.

Here’s the review from the local paper. And even though the website is a near-abomination, it’s worth a click to see Elvis in his plaid suit. Not many men can carry off that look and he looked amazing.

Regular readers are going to laugh when I say that one of the things that made the show so great was the audience.

You know how I’m always complaining about the people by us who talk during the whole show? Those people did not come last night and if they did, they did not talk. This was one of the most reverent crowds I’ve ever been in.

The show involves this giant wheel-of-fortune with and people from the audience some up and spin to pick what he will play. The people would spin the wheel and then they hung out onstage. And the people were all totally into it without being obnoxious. They danced in the go-go booth or danced with Elvis. They took photos. It was one girl’s birthday and Elvis led the audience singing “Happy Birthday” and she had the exact look on her face that you would have if Elvis Freaking Costello led a packed concert hall in “Happy Birthday” in your honor.

He sang every great song. At the end he did a bit where he stepped away from the microphone and sang.

No one made a peep.

It was an amazing show from start to finish and once again I had to thank my sweetheart for dragging me to something I thought I didn’t want to do.

This entry was posted in doing it wrong, favorite. Bookmark the permalink.

2 Responses to Carefree Mind Of Her Own