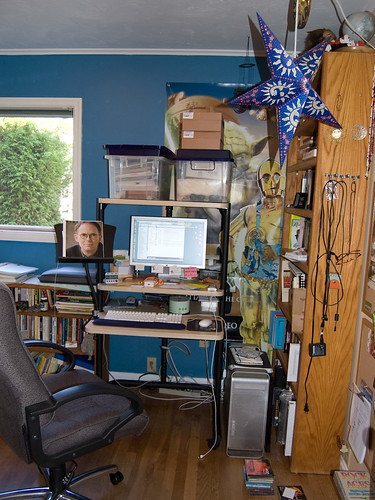 Today’s featured topic is a tour of my home desk area.

Against the back wall there’s a giant Attack of the Clones DVD promotional banner. You can see half of Yoda’s head at the top. Standing in front, a full size C3PO cut-out and C3PO wears my Star Wars purse from Bolsa Bonita (she has some similar purses in stock right now, if you’re envious.)

My computer lives on an anthro cart. They aren’t cheap but they look nice and when the world turns into The Road the good guys will be pushing these along instead of grocery carts. This thing is sturdy. Someday the top shelf will need to be cleared off for a printer but meanwhile, on the left is a giant box filled with Karuk related research. The box on the right is filled with craft-stuff from the fifteen minutes I thought I was going to get into crafting. Now it’s stuff I’m never going to use, but can’t bear to get rid of, taking up space. On top are my two boxes of critted manuscripts from Clarion West.

I can never remember exactly what computer I have but it’s a Mac and it’s big and shiny and I love it. It is surrounded by tons of crap including zillions of notes scribbled on scrap paper, stickie-notes and index cards, my iPod, a spindle of CDs and a spindle of DVDs and craft gloves that I wear to support my mouse-hand wrist when typing and highly recommend.

The music stand thing on the left has a paper with a bunch of Mac short cuts on it because I can never remember them. It also has a couple things on it that I want to learn on the computer but never get around to, like things with sound files. When I returned from Clarion West, Bob had left me a picture of William Gibson to watch over me and he does.

My chair is a $50 craigslist special. Over-crowded bookshelves are self explanatory. On the end of the tall bookshelf I have tons of hooks that I use to organize camera cords, charging cords, earbuds and a spare pair of glasses. Hanging from the ceiling is one of those cool paper shades hanging on a light-bulb. I use that in the winter so I can see what I’m doing during yoga practice without having to use the overhead light.