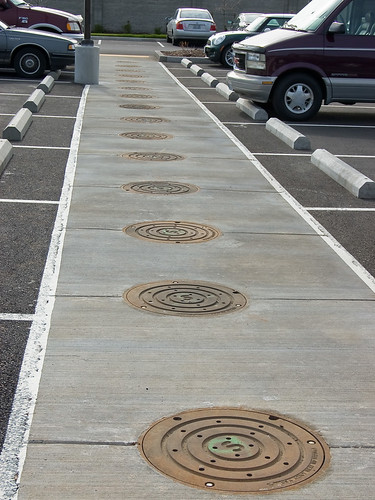 They Come From Below

This is the park-n-ride. I counted 14 manhole covers. Why so many?

First of all, last night I tried a Sunset recipe for Coconut-milk pudding rolls which turned out fantastic. They’re big fluffy yeast rolls baked with a giant bowl of sugar and coconut-milk poured over them. I think the healthiest part of these rolls is when you stop eating them. I was sad that I got full after three.

Second of all, fresh Doctor Who my ass. I’ve seen all but three shows from season 3 and I seem to be terminally cursed for catching those on TV. Is it possible that shows expire on the DVR? Can they do that without telling you? I swear I’ve had all three taped and waiting for me at one time or another and then they mysteriously disappeared. It’s possible I deleted them by accident but all three of them and at completely different times? The commercial said season three was coming out on DVD so I thought I’d just put the first two discs in the queue and that would cover it.

You know what disc 1 is? It’s the Xmas special and this dorky documentary of a dorky special they did where an orchestra played the music of Doctor Who while they showed clips and synchronized Daleks came out and spun around. Disc 1 also has outakes from the entire season and the Doctor and Martha’s set videos. Wouldn’t it make more sense for this to be disc 6? Or how about disc 4? The whole season had 13 episodes. 14 including the Xmas special. What do they need 6 discs for in the first place?