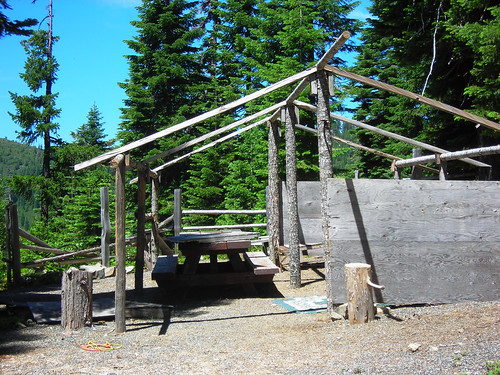 I spent my entire weekend chained to the computer working on a new story. It has a hunting scene and this is the hunting camp I was visualizing. It’s at the trailhead to Salmon Summit in the Six Rivers National Forest.

I drive to the office once or twice a week and the Tribe validates my parking. Today there was a new kid and he asked me for .95¢. No, I said. The validation covers it.

No, he said. It only covers two hours, ten dollars.

I think you’re wrong, I said. I should mention that he was a painfully charming ESL person.

No, he insisted. I’m not wrong.

I gave him a dollar because someone was waiting and it seemed petty to dither about $1. But give me the receipt, I said. I’m going to call over in the morning.

They gave you two hour validation, he said again.

They, my ass, I was the one with the validation stamp. I validated for four hours. That’s what I told him.

Oh, he said. It was too late. He’d already rung me up and taken my dollar.

You were right, he said as I drove away.