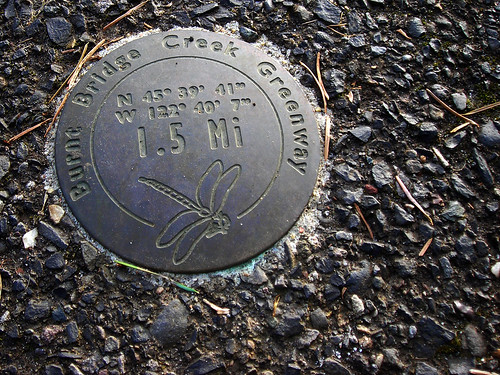 From the morning walk.

Last night I started Sense and Sensibility way too late but I thought I’d just watch the first hour and then go to bed. Once I got into it I couldn’t possibly go to bed without seeing my heroines find true love so I ended up staggering off to bed hours past my bedtime.

It’s still really good. I think it’s tragic that a whole generation of kids are growing up to think of Alan Rickman as Snape and will never truly appreciate him in this romantic role as the wounded Colonel Brandon who looks out for Miss Marianne. Rickman was in another movie that I haven’t seen in years but liked a great deal, Truly Madly Deeply (1990). Rickman plays a recently-departed ghost hanging out with his grief stricken girlfriend played by Juliet Stevenson who was the Mom in Bend it Like Beckham and said one of the funniest lines in that movie: “Get your lesbian feet out of my shoes.” And if that’s not enough, there’s a photo of her on imbd with Colin Firth who plays Mr. Darcy.

I know. I’m a little dizzy myself.

Back to Alan Rickman, he has played some fine baddies (Die Hard) in his day, but I like to think of him as Miss Marianne’s champion. 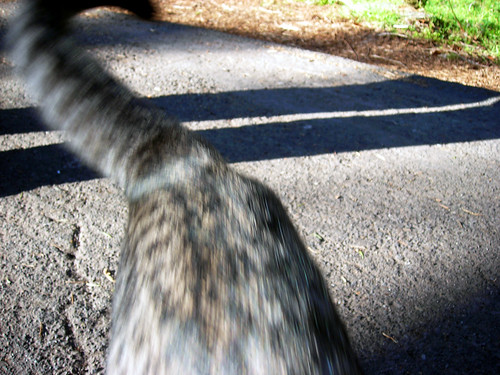 I can’t wait to get my new camera next week and hopefully when I take photos of moving targets, they won’t come out looking like this.

On our walk last week the very friendly and high energy cat pictured above flew out of his yard and ran over to meet us. I was squatting down to say hello when the string for the hood on my sweatshirt caught his beady cat eyes and he climbed me in one giant leap and began playing with it with his sharp kitty claws catching me in the face. We stopped that game.

We saw his owner and said, “Hey, you got a cat,” and he leaned against the car and looked skyward and let out a mighty sigh and said, “Yeah. Somehow we got two cats.”

This morning the cat ran out to see us again and since I wasn’t wearing that sweatshirt, I thought I was safe. I squatted down to take a photo and he launched onto me, purring like crazy, and tried to play with the strap on the camera. Crazy cat.

One more item. Last night Bob brought a DVD upstairs at dinner and said he had something he wanted me to watch. He said it was from him for Valentine’s Day. It’s called The Danish Poet and it’s a short animated film that won an Academy Award a couple of years ago. It is so sweet and heart-twisting. As far as I know you can’t find it online so you’ll have to ask at the library or something. Worth trying to find.