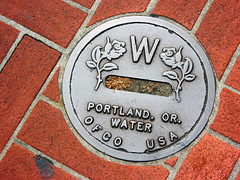 Portland Oregon Water
When summer boogied, it didn’t waste any time. We went from pleasant sunshine to cold, hard rain. I thought about pulling up the tomatoes last weekend but then thought we’d have at least one more warm streak. Maybe we will. I’m going to put my hoses away to see if it that will help.

We had the furnace serviced yesterday and some liner or pan or whatever that we’ve been watching has finally gone bad and we need a new one. It’s hardly catastrophic but not what I want to spend my money on right now and definitely not what I want to spend yet one more Friday doing – sitting around the house while someone works on the furnace. I had some money set aside to do something fun with and so far, something fun seems to be having heat this winter.

Oh well, there are way worse problems a girl can have. The serviceman did not feel great about us using the furnace while this part is kaput and temperature-wise we’re on the threshold. We can make do with a sweater and a space heater to take the edge off but blasting some real heat would be a lot nicer.

We had writers group here today and I baked an applesauce cake. We have tons of apples on our little old tree and I’ve been making applesauce the past few weekends. The cake came out good but it wasn’t as sweet as I would expect. I guess that’s because of the icing that calls for another half pound of butter and two cups of powdered sugar. I didn’t make the icing. It was still yummy. The group hasn’t met in a couple of months so it was fun to see everyone and we had two new people join us and I thought it went well. And I got some great feedback on a story I’ve been working on for eons that I couldn’t quite get to work. I think it’s very close.

I’ve been looking forward to getting my shows back except for two of them don’t even start until 2008 so I’m not as overloaded as I expected. I liked Bones but I’m not sure it even made sense. It seemed like the bad guy sort of appeared randomly in one of the last acts and then, !, they figured out there may be another bad guy but they never looked for him and instead resolved some character awkwardness resulting from last year’s season finale. I added Bionic Woman and I’m on board for now. Every person I’ve mentioned this to has mentioned the original which really has nothing to do with this show except for the name and basic premise, being that some poor mangled woman was rebuilt using advanced technology and has super human powers. I watched the original and I loved it but then, I was about 13, it was like the show was invented for me. I think the new one has potential if they do interesting things with the characters and if nothing else, Starbuck is in it. I almost think her character is the most interesting.

Last week while the TV was on The Tube the Journey video for “Don’t Stop Believin'” came on and it was a live performance from the Escape Tour. I know because I was a Journey fanatic at that point in my life and I saw that show at least twice, maybe three times. I helpfully told Bob the names of all the members of the band and a little bit about them which I’m sure he appreciated since I’m sure Journey was on the short list for his most loathed bands during that time.

Tomorrow afternoon we’re going to a get together for some individuals who worked on a program for Bob’s school. I’ll keep the explanation short â€” there was a collaboration of various individuals to do an art/performance piece that uses digital media. Try here. I went to see it last night and they set up this grid in an open room and then use these “pucks” that activate certain lights, sounds and rhythms based on where the puck is on the grid. So the performers move around with the puck and one person activates rhythm tracks and the other person activates melodic tracks and at the same time certain light patterns flash. I’m sure I’m doing a terrible job of explaining it but it was really cool, both as an art piece but also made you think about the applications for this technology.

That’s the scoop for now.