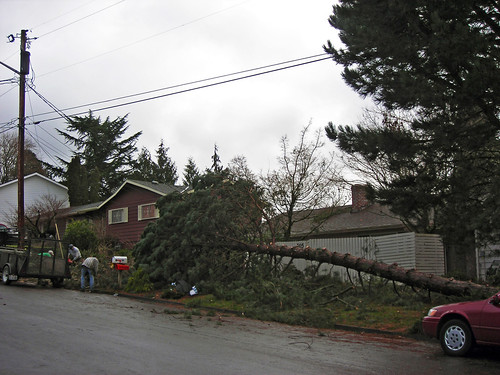 Tornados are rare around here. The guy on the news says that Washington averages one tornado a year somewhere in the state.

My mother-in-law is one of the people that was injured in 1972 in the deadliest tornado ever to hit the West Coast.

Yesterday, the tornado touched down in her next door neighbor’s yard.

You’ve got to wonder what the Universe is trying to tell her.

NOAA has a map of the tornado path here. If you divide the map into quarters vertically, her house is around the 1st quarter mark.

Bob went over there as soon as he knew what was going on, within two hours of the event. She was a model of calm. She had already talked to insurance and scheduled her yard crew. Also, an army of people were already papering the neighborhood with business cards and fliers offering services. There has never been a better time to own a chipper and a chainsaw in SW Washington.

Last night, my drive from the park-n-ride took me across the storm path but it was dark and I didn’t see much except a lot of debris and a few signs that blew over.

This morning I went to Priscilla’s neighborhood and wow, kind-of took my breath away. Chunks of limbs and debris are everywhere. Giant trees tipped over or their tops snapped off. You’ve got to wonder what it sounded like. Everywhere you look along her street there’s some kind of crew cleaning up limbs, sawing up stumps. Also all kinds of utility people and cherry-pickers. Quite a sight.

I arrived around 11am and one of the guys helping in her yard (they had 6 people) said they already had most of the backyard cleaned up. It still looked like a mess to me.

I talked to another guy who said that one of the neighbors saw the tornado touch down in the next door neighbor’s yard and said it was instant violence like the trees were stuck in a blender.